Deprecated: The $control_id argument is deprecated since version 3.5.0! in /home/j36n8w6zisg0/public_html/wp-content/plugins/elementor/modules/dev-tools/deprecation.php on line 304
 Are You Entitled To Damages If You Are In A Bike Accident? - Personal Injury Lawyer Los Angeles | Razi Law Group 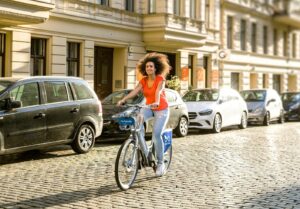 Share the road. It’s common refrain among bicyclists. Unfortunately most drivers, especially in large metro areas like San Francisco, don’t heed this edict, and can be the cause of most bike accidents.

As a result bikers are often struck by motorists. These accidents result in everything from a mild tumble with no injuries, or damage to serious collisions that critically injure the biker, severely damage their bike, or both.

If you’re hit by a driver or otherwise involved in an accident while riding your bike, are you entitled for damages? And if so, under what circumstances can you sue the negligent motorist for personal injury or property damage?

Here’s an outline of the circumstances in which you may have grounds to file a lawsuit and a brief explanation of your possible compensation if you’re in a bike accident.

PART I – Grounds for a Lawsuit in a Bike Accident

Driver is Charged & Convicted of a Crime

If you’re in a bike accident, and the driver of the car is charged and convicted of a crime due to their actions in the accident – that implies negligence on their part. In this situation, you have clear grounds for a personal injury lawsuit.

If you’re struck by a car or otherwise injured by a motorist while riding your bike, your medical bills alone are large enough to warrant a lawsuit for personal injury. In this situation, you’re also likely to qualify for compensation due to pain and suffering.

Your Bike is Wrecked

If you own an expensive bike and it’s severely damaged or totally destroyed in an accident, you’re entitled to damages. Even if you’re not injured, the driver is still responsible to repair, or more likely, replace your bike.

Your Child is Injured

You Followed the Rules of the Road

If you took all proper safety precautions, adhering to the rules of the road while riding your bike, and were injured by a negligent driver, you have obvious grounds for a personal injury lawsuit.

Keep in mind, however, even if you failed to take all precautions and were at least partially negligent in an accident, you may still have ground to pursue a personal injury suit.

If you’re injured in a bike accident and hospitalized as a result, the driver who hit you is responsible for your medical bills.

If your injuries are severe enough that you require extended care after leaving the hospital, or you’re unable to work after your accident, the driver is also responsible for covering extended care costs, and making up for your lost income.

You are also likely entitled to compensation for pain and suffering.

Damage to Your Bike

If you’re involved in a bike accident, it behooves you to contact an attorney who specializes in personal injury law to explore your rights. You may have grounds for a lawsuit and be entitled to compensation. A lawyer can help you exercise your rights and recover the compensation you deserve.